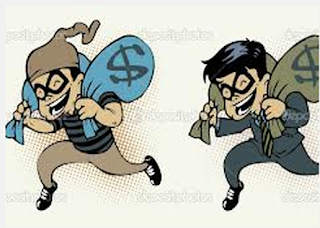 This is a picture taken by reporters at a recent commodities industry meeting of a couple notable president's of FCM's. It reminds me of one of my favorite movies Arthur where at the end he comes back over to Susan and said "of course I took the money."

The story broke yesterday about Interactive Brokers being fined for screwing around with the rules as they pertain to segregated funds. I know I have readers and clients who use this firm so I thought it would be a good idea to talk about this incident.

The only way this problem will ever be solved is to completely remove all access to client funds. Of course the industry does not want this because then it takes away their drugs. The have to fall back source to steal money from in the event they get into a bind. The temptation is simply too great, lose your business or take money that is just sitting there. I think since we are seeing so many incidents of this that the temptation to screw around with the money is too great for most people to pass on.

I have to admit to not being the most objective person around when it comes to this now having been burned. However, if you look back at one incident after another of a company making a public statement trying to soothe angst, when a story has broken, it is very hard to believe any corporate executive. Wasendorf of course released one of these statements after MF Global. I remember Lou Saban the football coach releasing a doozie the day before he changed jobs. Unfortunately lying has become so common that it is almost part of the job for a CEO. As a result I do not even think it is worth any effort reviewing the release from IB on this matter. What would you expect them to say?

I have no idea whether or not there are some deeper issues going on here or not. I left this firm long ago because of their terrible fills and customer service ( Peggy from the Ukraine from the Mastercard commercials ). I did mention I was concerned about them when I saw them getting into real estate loan with almost no margins at all. That told me something might be going on. That was a year or so ago, but it seems to me that the time of when this violation occurred was possibly around that time. I am not sure about this I am thinking out loud. I am going to use something they gave to one client in an email here which was news to me.

SIPC does not protect forex transactions. SIPC only protects cash to the extent it is on deposit for the purpose of purchasing securities. SIPC does not protect cash, even if held in a securities account, if it is there for another purpose like conducting a forex trade. However, if cash is held in other currencies to purchase securities, then it is protected. For example, if you deposit Euros for the purpose of buying shares on the FTSE, the Euros will be protected. However, if you are holding Euros as a currency trade, the Euros will not be protected.
If IB were to fail, a trustee would make a fact inquiry as to whether the cash in your account was deposited there for the purpose of purchasing securities.
What I find surprising about this is that I had been under the impression they had a sweep into an FDIC insured account like TD Ameritrade and from this it is clear they have no such thing. You can see that in the event of a company crash you have no protection. We all have learned the protections supposedly offered by the commodities exchange act is a farse and that is essentially what is stated above being what you get with them.
If you read the complaint you can see that there was a period of time that had they gone down a heck of a lot of money would have been missing and you would be like me waiting for years hoping to get some of it back. Fortunately, nothing bad happened during that period. It seems to me when I read the complaint they were playing a dangerous game with currencies and then claiming oops we did not mean it etc..
It is up to everyone to make their own call but I think no matter who you are or where your money is, if you are going to trade futures at this point you had better have your money divided up into multiple brokerage accounts. If and or when we enter into another market down turn you can bet your sweet bippy a few FCM's are going to go down and take clients with them. Keep in mind these shenanigans which now include IB, Cantor Fitzgerald, and also a large Japanese firm whose name escapes me, are going on during a time of one of the biggest stock market rallies of all time. What do you think will happen if we get a 30 or 40% decline? POOF is what will happen.
We hear that one of the problems that "causes" FCM's to screw around with client money is that the margins are so small it is hard to make a profit and stay in business. I guess we are all supposed to accept that and say well then steal our money to survive. If you look at what the CFTC is doing, it will have no effect at all on preventing more of this crap, ZERO. They also don't want insurance. Where that leaves us is... "When you have eliminated all the possibilities what is left no matter how improbable it might seem, is the explanation." In this case what we are left with is they don't care if more of these things happen. If they did the regulations would be such that they have no access to the money directly.
I can't tell anyone who might have an account there what they should or should not do, but I do think the best way to proceed is to split your money up no matter where your money is and that includes banks to based on what we are seeing happen as well as brokerage firms. That is just being smart it is not being negative or paranoid. I wish I had been more paranoid or negative when it would have mattered and had my money split up like I am recommending here.

Posted by Chris Johnston at 9:51 PM

Chris this stuff is very interesting. Can you say anything regarding Trade Station?

Thanks very much,
Ron

Thanks for sending me this I had not seen this. Reading this complaint if I had money there I would wire it out today, this one sounds bad to me. They are really screwing around with the money it appears.

LINK TO MY TRADING WEB SITE

Chris Johnston
My wife and I have been dog lovers for many years constantly moving up in the food chain. When we first met she had a Cairn terrier I named Louie after Louis Winthorp in the movie Trading Places. Since that time we have moved up into the world of Saint Bernards and we have found our calling in life. We live on a ranch with a large crew of Saint Bernards mostly from rescues with a few exceptions.